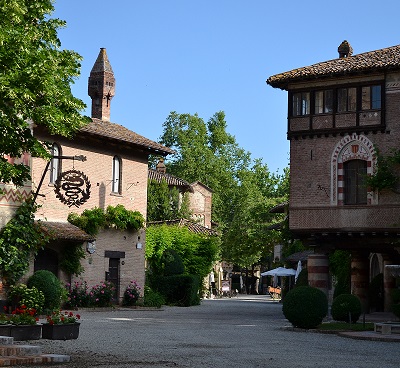 The first documents to mention Grazzano date from the 11th century. The next mentions date from the 14th century, when the Anguissola family, one of the most important families of Piacenza's history, was here in Grazzano. Here, Giovanni Anguissola had the Castle built in 1395.
The possessions of Grazzano remained the property of the Anguissola family up until 1884, when Francesca (Fanny) Visconti, Gaetano Anguissola's wife, died and she left the possessions to her nephew Guido Visconti di Modrone.
But the settlement that arose around the castle then has little to do with the village that we can admire today. The project of Grazzano Visconti dates from the beginning of the 20th century, it was the brainchild of the Duke Giuseppe Visconti di Modrone (1879-1941), assisted by the architect Alfredo Campanini.
Duke Giuseppe's dream was shared and common in the cultural context of the time, especially in England and in other industrialised countries. The Arts and Crafts was an English movement which considered the craftsmanship as the real expression of the human work and creativity, whereas industrialised production was on a massive scale and low-quality. This movement deeply influenced the Village's architecture and its authentic neo-medieval style. This choice is due to the pursuit of the national medieval roots in a nineteenth-century Europe which spread this style in painting, decorative arts and architecture.