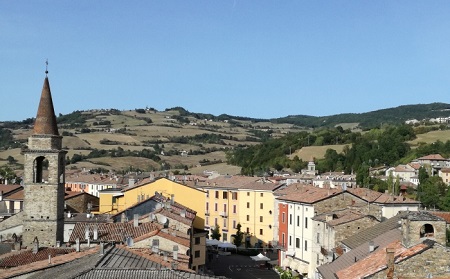 Already settled in the Bronze Age and colonised by the Romans, many religious buildings dependent on Pavia were erected in the area of Bettola following the Lombard conquest. Round about the year 1000, the monastery of San Savino in Piacenza owned much land and several fortresses in the area.
In the Middle Ages the Visconti of Milan were lords of the area and in 1441 Filippo Maria Visconti recognised a partial autonomy within the Visconti dominion to the mountain populations of this district, accepting and recognising a community institution  with its own magistrates and privileges, the "Magnifica Università della Val Nure" or Magnificent Union of the Nure Valley, based in Bettola. This institution continued to function up until the time of the Napoleonic conquest.
The Middle Ages and Renaissance were marked by ferocious struggles between the local noble families, especially the Nicelli and the Camia. In an attempt to resolve the problems of instability provoked by these conflicts and to limit the authority of the local nobility, Pope Paul III Farnese ordered the construction of a fortified residence that housed Papal representatives until the end of the 18th century.
With the administrative reorganisation that followed the Napoleonic conquest, the municipality of Bettola was established in 1805. It is one of the largest in Italy in terms of area.