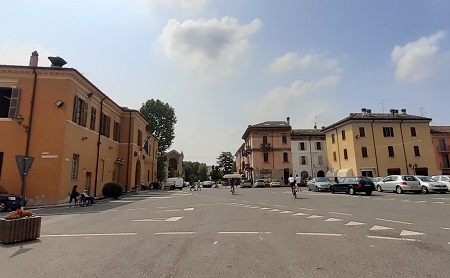 We do not know the date of the first permanent settlement on the present site, but certainly the Romans were here, and later the Lombards.

"Carpenetus" is mentioned for the first time in sales deeds of the 8th and 9th centuries.

Other mentions of Carpaneto occur on the occasion of attacks and destruction of the village between the 11th and 13th centuries.

For a short while it belonged to the Malaspina, to the Scotti, to the Del Cario, and to the Anguissola.

In 1441 Filippo Maria Visconti nominated Alberto Scotti Count of Carpaneto, and he set about the reconstruction of the Castle and the fortification of the town, erecting a massive town wall (no longer in existence).

In 1606 the Farnese granted the Marquessate of Carpaneto, Diolo and Vigoleno to Cesare Maria Scotti. The area remained in the hands of the Scotti up until the time of Napoleon. In 1806 the first mayor of Carpaneto was nominated. At the time the municipal territory of Carpaneto included five other important settlements, each with its own castle, church and mill and the right to a representative on the town council.

Carpaneto was also the centre of a canton, including the towns of Gropparello, Cadeo and Travazzano.

Today nothing remains of the old village. Innumerable demolitions have taken place over the years, leading to the disappearance of the scarped walls, the moat, the towers and the gates with their drawbridges. Up until 1930 the gate towards  Piacenza survived with remains of the bridge.

Since the 19th century Carpaneto has seen considerable urban and demographic growth, that reached its highest point during the economic boom but still continues today.