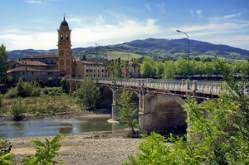 A BIT OF HISTORY
A land of ancient origins between the river Nure and the hills.
The ancient name Ponte Albarola changed in Ponte dell'Olio when the town became an important market and storage of olive oil from Liguria region.
WHAT TO SEE?
As soon as you have crossed the river, you are welcomed by the historic church of San Giacomo, a mediaeval building that houses another important monument, the organ by Antonio Sangalli.
Next to the church is the fine bell tower, 18th century, and a little further away on the right is the former Town Hall with the clock tower, 19th century.
The chapel of San Rocco goes back centuries while the Fornaci, the cement kilns, are an important site of industrial archaeology. Not far from the centre is the Villa San Bono, famous as the dwelling of Caroline of Brunswick, wife of George IV.