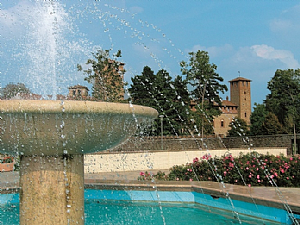 A BIT OF HISTORY

Going by the testimony of archaeological finds, Vigolzone has ancient beginnings. In fact, the name "Vicus Ultionis" means the village of revenge, referring to the Battle of the Trebbia in 218 BC, a battle where Hannibal was victorious over Scipio and Sempronius.

The first historical documents mentioning the town go back to 830. "Vicus Ussoni" or "Vicus Ursoni" is mentioned in the Cartulary of S Antonino and the Cathedral of Piacenza.

Other documents take us to 1095, the year of the investiture of Lantelmo Confalonieri by Aldo, the crusading Bishop of Piacenza. The town is referred to as Vigolzonum or Vigolizonum.

In the 13th century the place was involved in the struggles between the emperor and the city states. In 1214 it was destroyed by militia from Cremona sent by King Enzo, Frederick II's son.

The castle that stands today in the town centre dates from 1330 and was built by Bernardo Anguissola, lord of the valley, cavalry general in the service of Galeazzo Visconti.

Various battles have been fought in this area, some particularly bloody, like the clash of 23 October 1521. Giacomo Anguissola and Jacopo dal Verme fought and lost against their French adversaries led by the deputy governor Trivulzio, leaving 300 dead on the ground and many prisoners.

The Anguissola held the fief of Vigolzone until the 19th century.

In 1806 the municipality of Vigolzone was proclaimed, at that time part of the Département of the Taro, under Napoleon.

The Castle is privately owned but you can admire its towers from a distance, and all around are other old buildings, still used as people`s homes.
It is in the lovely quiet piazza del Castello that various theatrical and musical events are held in the summer, and on these occasions you can visit the chapel.
A short distance away is the unusual church of Santi Mario e Giovanni Battista, a modern building that houses some interesting works of art.

Vigolzone's hills have diffetent trakking paths, and along them you can stop in wineries for a snak and a wine taste experience.